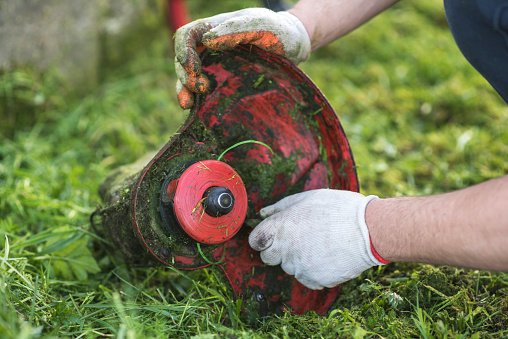 Weed eaters are fairly compact yet complex pieces of equipment. They come with their own engine and other internal components, meaning they need to be cared for properly. Understanding the various components goes a long way to providing proper care.

There are screws, particularly on the unit’s carburetor, that can be difficult to adjust. The process is relatively simple and involves turning them a set number of times and adjusting to the “Hi” and “Lo” settings of the manufacturer. The process can take a few minutes with the right amount of experience, though just about anyone can do it.

Before you start, know your weed eater. Know the carburetor and other components that come in most two-cycle engines. If you think that you can just pop open the cover and figure it out as you go, you are most likely setting yourself up for failure.

An adjustment can be made to the gasoline mixture in these carburetors. Sometimes, an oil additive will be required for various reasons. You can always take it to a professional but if you plan on doing it yourself, know what to look for and how to do it.

Start by locating the pair of fuel-adjustment screws. These can typically be found somewhere on the side of your weed eater’s carburetor. The pair should have both “Hi” and “Lo” labels to make it easier on you as you undertake the task.

Using a small Phillips screwdriver, tighten each of the screws until the needle end of those screws is positioned into the “jets” of your weed eater’s carburetor. There are some videos that will show you distinct positioning and this can slightly vary based on the model in question.

There are also some mixture screws that have non-traditional heads. You may need a specific tool to loosen them, though some DIY screwdrivers can get the job done. In the case of the latter, it may be better to have a professional look things over.

When you’ve made the turns, pull the engine’s choke and start it up. If it sounds rough initially, that’s fine; just keep the engine running by lightly applying the gas throttle. The engine has to be warm in order to make the proper adjustments.

Turn the “Lo” screw counterclockwise slowly. The engine should start to smooth out a bit, sounding less and less rough. Moreover, it should start running smoothly without dying or stalling out, but it should not turn the heads in the weed eater.

Only when the engine has come to a smooth idle should you move on to this step. Push the throttle on the weed eater to full open and see what the engine does. There are a couple of possibilities here, but it should continue to run smoothly.

Should the engine of the weed eater sputter at all, turn the “Hi” screw. Move it clockwise but only about 0.25 of a turn. You should notice the engine start to smooth out a bit. Of course, the exact adjustment of that “Hi” screw will depend on the load size, the head of the weed eater, and how fresh the fuel is.

When the engine sounds smooth, take it for a test run. Operate the weed eater as you normally would and listen to the performance of the engine. If the screws have been properly adjusted, the engine should remain running smoothly at all times.

If you notice sputtering or uneven running, go back and readjust the “Hi” screw, moving it clockwise until the engine starts to even out. Keep that screwdriver with you so you can make any minor adjustments as you go.

Finding the right mixture is dependent on the make and engine type. Keep making minor adjustments until you find the right level of performance and always monitor fuel and oil levels when making these adjustments.

What Are the Mixture Screws for?

Your carburetor requires a distinct fuel mixture in order to properly function. When that mixture is not right, it can play havoc on the carburetor and other components within the weed eater. So, where do the screws come into play?

EPA regulations. Back in the mid-1990s, the Environmental Protection Agency (EPA) began implementing regulations specific to engines like these. They required a fuel mixture adjustment that was tamper-resistant for 2-cycle engines. This is all due to the emissions that they give off.

Adjusting fuel. The main purpose of these screws is that they are responsible for the amount of fuel that gets into the engine. Engines require a certain mixture to perform properly. Too much or too little can drastically impact the performance of the engine. When you hear your engine sputtering, it could be that the fuel it is getting is imbalanced.

Manufacturer settings. The manufacturer doesn’t want just anyone messing with these screws. This is because the mixture for the engine is very specific and people tend to start experimenting. When people mess with the mixture instead of replacing or cleaning filters, things get clogged. When things get clogged, airflow gets restricted. And sooner or later, something will get clogged or break down and need replacing. Simply put the manufacturer wants you to leave those components alone.

That said, people tend to want to save money anywhere they can, or they want to expand their knowledge base. So, if you plan on adjusting those mixture screws, it is important that the job is done carefully and properly.

Now that we know how important it is for your weed eater’s carburetor to have the proper fuel/gas mix, what is that ratio? After all, too much or too little fuel and your carburetor (as well as the other components) can begin to degrade and wear far sooner than it normally would.

Most two-cycle gas engines (which you find in weed eaters) use that gas and oil to keep the piston and crankshaft lubricated. Insufficient lubrication can lead to the components wearing and even overheating.

Fuel mixture for Weed Eater brand. For all weed eater products, there is a specific fuel/gas mix ratio. For all the two-cycle gas motors out there, you will want a 40:1 ratio when it comes to gas to oil.

That 40:1 ratio equates to about 3.2 ounces of oil for every gallon of regular gas. Make sure that the gas is 87 octane with 10 percent alcohol or less. As for the oil, it has to be specifically formulated for two-cycle engines. Don’t just use motor oil for cars because it has specific noncombustible additives that can damage the engine.

Other brands of trimmers.

Then again, weed eater is not the only brand on the market and not all weedeaters are created equally. For other brands of trimmers, there are different ratios. If you are looking for an Echo trimmer, the ratio is closer to 50:1. That equates to 2.6 ounces of oil for every gallon of gas.

Take a look around to find the proper guide for your brand of trimmer. You should be able to find the fuel/oil ratio stamped somewhere on the fuel tank or gas cap. Keep your owner’s manual; it will probably be there.