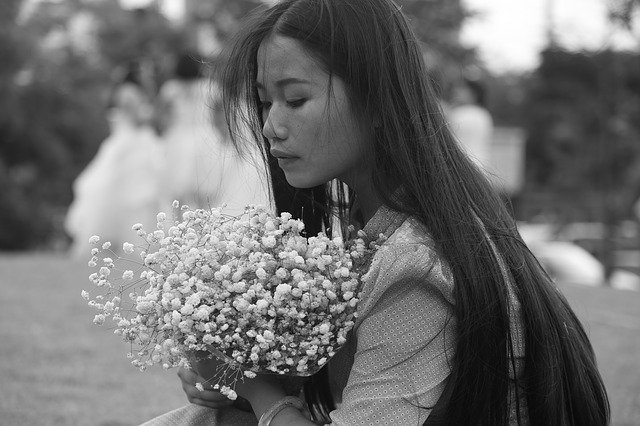 Etiquette is just one of the many considerations made by wedding guests, atop travel arrangements, gift possibilities, and child-care coordination.  As you begin to plan your outfit, you might be left wondering if that little black dress that you’ve been thinking of wearing is actually okay to wear at all.

Although it is becoming a bit more acceptable with each generation, traditionally, it is still generally considered bad luck to wear black to a wedding, and it’s certainly not a good, supportive look as a guest.  Until we rid of the stigma associated with wearing black to a wedding, it’s probably best to steer clear.

Is it bad luck to wear black to a wedding?

Black has long been known to represent sorrow, death, mourning, and sadness. This is why you often are encouraged to wear black to a funeral.

As the bride, wearing black has become more acceptable over the years, though it’s still not the most ideal color to select. However, as a guest, it is normally frowned upon to wear black to a wedding since doing so can indicate your negative feelings for the marriage, therefore creating bad energy for the couple that is supposed to be celebrating.

Is it bad luck to wear black to a wedding as a guest?

Traditionally, it has long been considered bad luck to wear black to a wedding.  Black has historically been associated with mourning, so it seems out of place at a wedding.

In general, guests are encouraged to wear solid, neutral tones to weddings. Note that the stigma does not apply to men’s tuxedos or suits.  These outfits are usually encouraged since they are considered formal, respectful, and appropriate for the affair.

Is it bad luck to wear a black wedding dress?

Though wedding dresses are typically white, increasingly more brides have gotten creative with their dress color choices over the years. Black is now considered an acceptable wedding dress choice, even if it’s not the most ideal.

Wearing a black wedding dress used to be considered bad luck on a superstitious level, along with yellow, grey, pink, red, and green. Now, it is arguably elegant and perfectly formal, especially for more gothic-themed affairs.

Is it bad luck to wear white to a wedding?

As the bride, you’re encouraged to wear white to your wedding since this represents purity and a new beginning with your soon-to-be spouse.

As a guest, it’s still frowned upon to wear white to a wedding. While it doesn’t necessarily cause bad luck, it’s considered impolite as the bride is traditionally supposed to be the only one in white.

Guests’ eyes are naturally drawn to white when searching for the bride on the big day, and you certainly don’t want to be mistaken for her, or distract from her.

However, this stigma is beginning to fade with each passing generation, so you may be close to a time when wearing black to a wedding is completely acceptable.

Is it bad luck to wear a wedding dress before marriage?

They do say it is bad luck to wear a wedding dress before marriage.  This, of course, only applies to situations where the wedding dress is intended for an actual wedding.  The stipulation and superstition doesn’t qualify for wedding dress costumes.

If you’re particularly superstitious, beyond your original dress-finding session and following fittings, it’s best to stay out of the gown until the big day. You don’t want anything to accidentally happen to it anyway.

Can you wear black to a wedding?

Wearing black to a wedding will likely cause whispers from those around you. This is because guests are typically encouraged to wear neutral tones.  Even going with a bold red or sassy silver is more acceptable than wearing black.

If you are not the bride, your black attire could be viewed as a fashion statement against the union of the duo being married, since black has always traditionally been associated with mourning.  You may unintentionally be signifying that you do not support the marriage.

Is black at a wedding bad luck?

Wearing black to a wedding as a guest has long been believed to be a bad omen for the two people getting married.

Traditionally, those who are blatantly unsupportive of the marriage tend to wear black as a statement.  Often, an unconvinced family member will make a statement regarding their feelings about the marriage by dawning black attire.

Is it bad luck to wear a wedding dress from a previous engagement?

A wedding dress leftover from a previous engagement means that it was never actually worn to a wedding.  Wedding dresses aren’t cheap.  Chances are, you picked your existing dress because of how you looked or felt in it.

If that feeling differs with your change in intended spouse, then, by all means, get yourself a new dress.

If you felt like a million bucks when you first put it on and you’re still waiting for the opportunity to rock that gown, then you are perfectly fine to wear that dress to your actual wedding.

It’s okay for there to be such a thing as: Right dress.  Wrong guy.

Is it bad luck to wear black to an Indian wedding?

The Indian culture is very respective of their shared beliefs, and the idea that wearing black to a wedding is bad luck is one of them.

Indian weddings are best known for their vibrant, festive colors, so it is best to adorn yourself in colors and patterns that match this expectancy in order to blend in and avoid creating a distraction from the bride and groom.

What does it mean if you wear a black wedding dress?

Choosing to wear a black wedding dress is the bride’s prerogative.  It is a bold statement that goes against traditional expectations.  It could be an indicator of the bride’s confidence in herself and her character, or it could simply be her favorite color.

Wearing a black wedding dress indicates not much more than a fashion statement by the bride wearing it.  Perhaps she prefers the color, looks best in it, doesn’t want to be traditional, or it goes well with her theme.  In any case, it is acceptable if she sees fit.

If the bride wanted to make a statement about the marriage itself, she would be better off simply not showing up.

Is it a bad omen to wear black to a wedding?

An omen typically suggests a future event, so wearing black to a wedding could be your suggestion for darkness in the couple’s future.  In this case, their future is clearly their marriage.

On a religious level, often, weddings take place in a church.  With black the greatest known symbol of sadness, death, darkness, and even evil, it’s a bit taboo and could be perceived as disrespectful– particularly depending on culture– to rock the color in God’s house, especially when witnessing the union of two of his followers.

Can I ever wear black to a wedding?

As each generation continues to challenge the rituals and expectations of those that preceded them, wedding etiquette will continue to evolve.

Since black is as much an indicator of elegance and formality as it is death and mourning, perhaps society will get to a point where wearing black to a wedding is not suggestive of anything other than the best-looking outfit in one’s closet.

However, I would expect it to remain a deal-breaker in certain strict cultures.

What should I wear to a wedding?

In terms of color, you should aim for neutral tones and simple patterns.  For most weddings, cocktail attire is preferred.  Black is an acceptable color for men’s tuxedos or suits.

Alternatively, check for attire requests on the invitation itself.  Some couples insist on formal outfits (such as “black tie” or “black tie optional”).

Others request that guests wear certain colors or types of outfits to fit with their theme and to enhance their photos.

In short, all eyes are to be on the marrying couple.  You should not aim to distract from them in any way.  Always submit to their requests if doable.

What should I not wear to a wedding?

You should not wear anything that others might perceive as inappropriate or disrespectful.  You should familiarize yourself with the culture that will be present at the wedding– on behalf of both parties– to ensure that your outfit will not be offensive in any way.

You should generally stray from outfits that could be described as taboo or showy.

A wedding is one of the most exciting events to attend, whether as the celebrating couple or as a guest.  Out of respect for the hosts, their family, and their culture, it’s best to familiarize yourself with etiquette prior to attending.

From bringing a gift that typically covers the cost of your plate to avoiding bringing children if they didn’t appear on the invitation to wearing a neutral tone instead of black, learning some tips before you head out for the big day will certainly keep the eyes off you and on the happy duo instead.