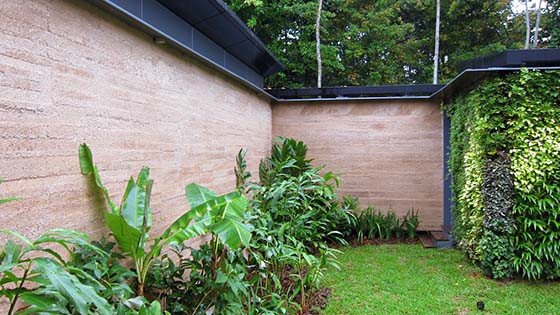 In the past few years, society has become increasingly concerned with the impact that we humans have on the environment. Researchers around the globe are constantly coming up with new ideas on how they can change the way we use products and how they affect the environment.

Building and construction is an industry in which many companies are trying to implement the use of sustainable materials that are eco-friendly and cost effective to decrease the carbon footprint left on the earth.

One such material that has recently made its way into the construction field is hempcrete. It has become a substitute for concrete. The million dollar question here is whether or not hempcrete is better than concrete and if the cost is worth it. Hempcrete costs around $60 more per square foot than concrete, but it saves money on heating and cooling, which may equal out.

Hempcrete, as the name implies, is made from hemp. Hemp is a strain of the Cannabis sativa plant and its woody core is mixed with a lime-based binder to make the hempcrete. When mixed with a lime binder and water, it makes a concrete substitute.

Where Did it Come From?

Hempcrete was first discovered in France in the 6th century in a bridge abutment. It has been widely used in Europe and is grown by commercial growers with a certification and has a very low THC percentage.

How Does It Work?

When the wooden core of the plant is mixed with the lime binder and water, it creates a chemical reaction between the two. When set, it results in a lightweight material similar to concrete, but weighs only ⅛ of that of concrete. You can place a block of hempcrete in a bucket of water and it’ll float.

One of the main and most important advantages of hempcrete is that it’s environmentally friendly. It can withstand humid conditions, fungus and mold growth, and dampness. Since it’s composed of plant fibers, the hempcrete can hold high moisture contents and release it when the conditions are adequate.

One tonne of dried hemp stores 325 kilograms of carbon dioxide. The hempcrete absorbs the carbon dioxide when it’s growing and after it’s been made into materials for building. Greenhouse gases and emissions help reduce its environmental impact. It doesn’t release harmful toxins in the air either.

Lastly, it’s a fantastic heat and noise insulator. The material stores the heat and slowly lets it go as the building cools itself. Instead of keeping the heat trapped within the building, it will cool itself. This is extremely beneficial to those who don’t want to rely on their heating and cooling systems as much. It’ll save them time and money in the long run.

Concrete may seem like it would be more sturdy and durable than hempcrete, but it’s not. Hempcrete can withstand an earthquake because it’s three times more resistant than concrete. It has a low density and won’t crack under movement, unlike concrete, which will crack when exposed to a lot of movement.

Not only is it resistant to movement, but it’s also resistant to fire, water, pests, and it’s 100% recyclable.

Although hempcrete is environmentally friendly and can save homeowners money on their heating and cooling costs, it’s extremely variable in its components and formulations. Because of the abundant space voids in hempcrete, the proper tamping absolutely has to be ensured in order to obtain maximum bonding and integrity. It also can’t be used in load-bearing structures.

Furthermore, if the density of the final cured product isn’t correct, the thermal performance of the hempcrete will be subpar. When compared to concrete, hempcrete needs more control whereas concrete doesn’t.

So now we take a look at the alternative to hempcrete, which is concrete. Concrete is a combination of sand, water, cement, and rock. Don’t get this confused with cement. Cement is simply a component of concrete.

How Does It Work?

The concrete in the cement acts as a binding agent. When the concrete materials are mixed with water, the mix will harden into a durable material. Once hardened, it weighs around 150 pounds per cubic foot, which is much heavier than hempcrete. It should be placed as close to the final position as it can possibly get.

Even though hempcrete sounds like the better option, concrete does have its benefits. One of the most obvious benefits is that concrete is unbelievably strong, but not earthquake-proof like hempcrete is.

As with hempcrete, concrete is sound-proof and can retain heat very well. Unfortunately, when it’s cold outside, the concrete doesn’t really help that issue. It will remain cold in the area if it’s not heated thoroughly. During the warm months, however, the concrete does very well keeping the heat out.

Concrete is resistant to compression, fire, wind, and water. As mentioned earlier, it is not earthquake-proof like hempcrete is. If there is a shift in the land, the concrete has a tendency to crack. It can also crack under extreme pressure. More so, it can be recycled and used as granular fill.

Concrete can be molded into any shape needed for whatever construction project is being done. It can be easily repaired as it can be sprayed into cracks at the damage site very quickly and easily. Additionally, when spraying, it can reach into tunnels and other difficult areas to reach with ease.

Concrete emits a lot of carbon into the atmosphere whereas hempcrete absorbs it. Concrete is composed of calcium silicate and in order to make the compounds, the process requires the heating of limestone at 2,640 degrees Fahrenheit, along with other materials. When being made, the heating burns fossil fuels. Concrete is the third largest source of greenhouse gas pollution in the U.S.

Additionally, concrete has to be reinforced. This is to help reduce cracking due to its low tensile strength. Since it’s such a porous material, it can accumulate mold, unlike hempcrete, which is mold-resistant. It also expands and contracts based on the temperature and moisture changes around it. This can result in cracks and loss of structure strength.

Let’s take a look at hempcrete vs concrete cost. One of the major drawbacks of hempcrete is that it’s rare and costly. It can greatly increase the price of a building by a lot. Using hempcrete to build could increase by up to $100,000, depending on the size of the home. The cost of a hempcrete structure per square foot is on average $180 whereas concrete only costs around $120 per square foot. Additionally, hempcrete can’t be used on load-bearing structures, which could prove difficult during home construction.

When we look at concrete, it’s less money to spend, but it doesn’t have the same advantages as hempcrete. Even though hempcrete costs more to build with, since the heating and cooling costs may be lowered, the cost may equal itself out.

As you can see, hempcrete and concrete may be similar in some ways, but when you look at the bigger picture, one is better than the other depending on what you are using it for. Concrete is better when it comes to building structures that require a lot of load-bearing areas and saving money on building costs. On the other hand, hempcrete costs more, but it’s resistant to mold, wind, water, fire, and earthquakes, whereas concrete isn’t mold or earthquake-proof.

Concrete and hempcrete are both great products, but the final choice greatly depends on what you plan to do with it and how much you have to spend.