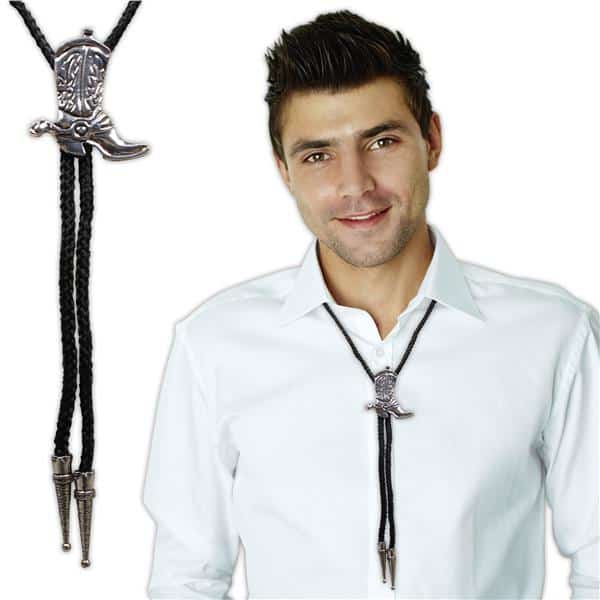 The bolo tie is one interesting fashion material that has indeed made its mark. Many call it the bola tie while some call it the cowboy tie.

I sometimes call it the string tie. Whichever way we see it, as long as it is still those ‘ropes’, it remains the bola tie. That bola tie.

What is A Bolo TIe?

Basically, the bolo tie consists of a braided leather cord. It is looped through a slide or clasp. This hold is made of wood, metal or beads. Due to Western origin, it is shaped in like themes also.

Some designs include bears, cattle, lions, skulls, mountains. The insertion of precious stones especially the turquoise makes the bolo even more attractive.

The Origin of Bolo Ties

The name and the thing ‘bola tie’ have a long string of history. History has it that it was inspired by the bandanas that Zuni Indians wore around their necks. By pinning it with a silver clasp, they kept it from flying in the air. 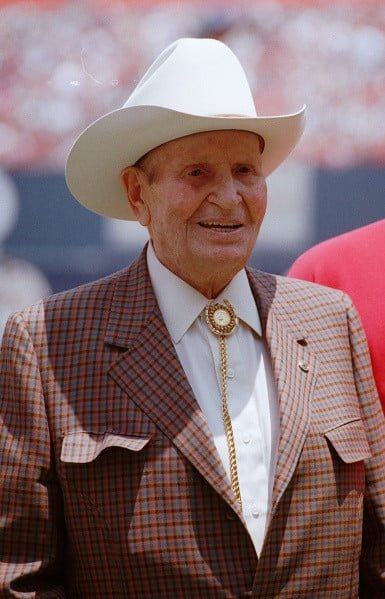 It also has origins from the Indian amulet laces. Usually, the Indians had always sported the tie for a long time before now. They made round-the-neck style of these laces. Jewelers decorated the laces with teeth, bones and stones alike.

Amazingly, the bolo also has a prison origin. The bolo tie was originally a noose used for hanging criminals. However, the rope breaks sometimes.

And it was not the custom then to hang a person two times. The offender becomes a free man but with the broken rope hung round his neck. The, it was a sign of penance for the deed s of the criminal. Soon, another ‘bolo’ theory was made up.

On the other hand, Bill Krammer has another story. In his book Bola Tie: New Symbol of the West, the bolo is traced to Victor E. Cedarstaff.

The Arizona silversmith was out hunting when his silver-clasped hatband flew right off his head. His hat was also blown off. He held on to his hatband and put it over his neck.  And lo, it looked just like some odd tie. His companeros complimented his new tie.

But Victor had caught the idea. He got ropes knitted and made certain clasps of his own design.  Soon, he patented it and named it the ‘bola tie’. The boleadora cords used by Argentinian cowboys inspired the name.

Ever since, top names including Wall Street businessmen, fashion models, football players, hip-hop artists, cowboys have all donned this article. And as always, it looks just damn good on them all.

An average bolo is about 38 inches long from knot to knot. However, it is 42 inches with the silver tips and all. Longer bolos are however suggested for taller people.

Wearing a bolo With A Vest

How To Wear Bolo Tie At Wedding

For informal situations, use bolos that fit your style. Employ the use of cool turquoise stone or just anything beautiful and standard.

Also, wear colored button-up shirts. It will add a little more life to your outlook.

Make your clasp a little below your collar button. It will help you achieve a cool informal outlook. 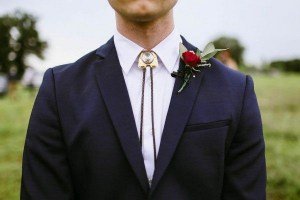 A chino pant or a pretty short skirt would be just fine.

Make sure the bolo color matches other the color of other accessories. For, example, a black-studded ring will look more great with a bolo with an inlaid dark stone.

Do Women Use Bolos?

It is used by everyone including women. The use of bolos has been always popular in the women fashion industry, especially in the West. 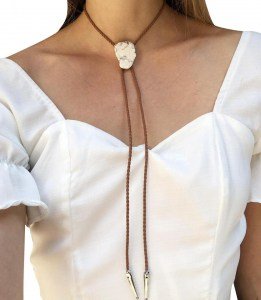 In many ways, the answer to this question remains “Yes.” Many states have adopted the bolo tie as official neckwear.

On March 13, 2007, Bill Richardson, New Mexico’s Governor signed into law that the bolo is now the state’s official tie.

Are Bolo Ties Coming Back?

The bolo has become a significant escape from the “very official” office tie. This had made it become more popular in official environments.

Fashion houses are also adopting it in their statements. That ruddy elegance it creates is actually its secret fascination in back stages of fashion runways.

Currently, it stands as the official neckwear of Texas, Arizona and New Mexico.

It also garners an astonishingly increasing followers’ base. The #BoloTie hash tag has about 50,466 posts and still counting. There is this new rave for this antique yet attractive material.

Even Google Trends recorded a 120 percent increase over the past 12 months for “bolo tie amazon.”

So, hope you got that pretty well. Bolos are practically available on any online clothe and accessories store. You can as well just sneak up to grandpa’s wardrobe. Trust me; vintages are quite the best for any moment. Bolos are just as best for you.